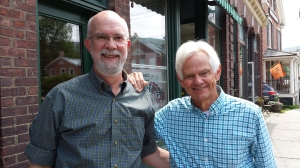 On June 26, 2015, the U.S. Supreme Court ruled 5-4 that same-sex couples could wed throughout the country. The avalanche that swept America actually began as a snowball  high up in the Green Mountains in the late 1990s. In 1999, the Vermont Supreme Court ruled in Baker v Vermont that the Vermont state legislature must craft a law granting all of the rights and privileges of marriage to same-sex couples. In 2000, Vermont legalized civil unions, the most sweeping grant of rights to same-sex couples up to that time. In 2009, the Vermont state legislature legalized same-sex marriage, making it the first legislature to do so. We talk about Vermont’s role in the marriage equality revolution with some of the pioneers of that effort:

State Representative Bill Lippert, who led the fight for passage of civil unions in 2000, and same sex marriage in 2009.

Stacey Jolles & Nina Beck, a lesbian couple who were one of three same-sex couples who sued the State of Vermont in the late 1990s in Baker v Vermont, catalyzing the fight for marriage equality in Vermont, and in the U.S.

The Vermont Conversation with host David Goodman is a podcast of VTDigger.org, Vermont's nonprofit news source. It also airs live Wednesdays at 1 PM on WDEV/Radio Vermont. The Vermont Conversation features in-depth interviews on local and national issues with politicians, activists, artists, changemakers and citizens who are making a difference.

Vermont journalist David Goodman is the author of a dozen books on topics ranging from politics to backcountry skiing. He's hard to find on powder days but easy to find at dgoodman.net and david@vtdigger.org